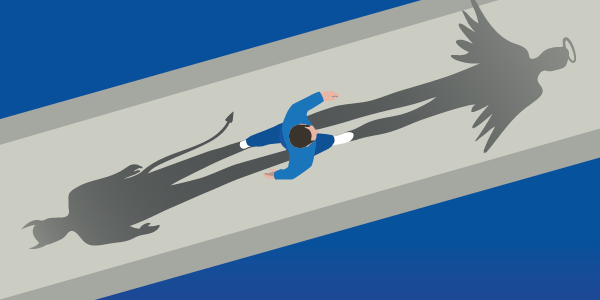 Continuing scandals and revelations from the Hayne Royal Commission are further eroding Australians’ trust in the ethical behaviour of companies, according to the findings of Governance Institute of Australia’s annual Ethics Index.

“Australians expect high standards from their financial institutions, but our research suggests that these are far from being met,” said Governance Institute’s Chief Executive Steven Burrell.

“The community’s faith in some of the country’s biggest corporations has been sorely tested, following a turbulent 12 months in Australia’s banking finance and insurance industry.

“The Index suggests numerous high profile scandals, and the alarming corporate breaches being revealed on a daily basis by the Royal Commission into Misconduct in the Banking, Superannuation and Financial Services Industry, are undermining confidence in the sector,” Mr Burrell said.

The Australian Ethics Index overall has fallen six points since 2017 – from 41 to 35 – dragged down by the poor perception of ethics in the banking sector.

The Index is derived from Governance Institute research, which measures Australians’ expectations and perceptions of ethics across a wide range of sectors and industries.

While most sectors were found to have remained relatively constant, the corporate and finance sectors saw significant falls of 6 and 12 points respectively, demonstrating the poor regard of the public for such businesses.

“For the third year in a row, Banking, Finance and Insurance was the lowest category in the Index. Its net score has dropped dramatically from last year with a score of -15. It has never before scored this badly — 55% of respondents consider the sector unethical and only 28% view it as ethical,” Mr Burrell observed.

“In contrast, the Education (80) and Health (70) sectors continue to hold the highest perceived level of ethical behaviour.” 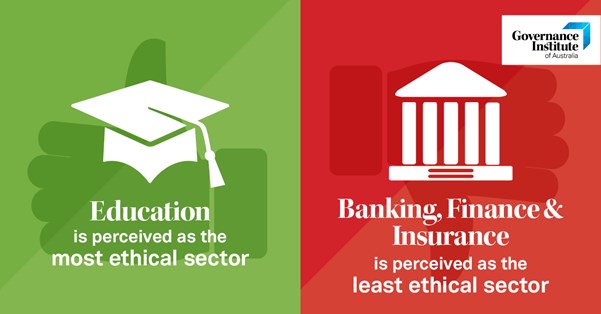 According to Mr Burrell, the Media continues to perform poorly, with Facebook (-33) and Twitter (-22) scoring particularly badly. ABC was again rated the most ethical media platform (46).

“Facebook’s perceived net ethics score is perhaps unsurprising, given the Cambridge Analytica scandal, while Twitter’s result shows it continues not to be seen as a reliable source of news,” he said.

The most trusted professions were found to be ambulance officers (88), fire fighters (85), and nurses (84), while the community still doesn’t trust Federal politicians (-38), state politicians (-34), or real estate agents (-24).

The most ethical organisations were primary schools (71), medical charities (68), and pathology services (68), which contrasted with pay day lenders (-54), life insurance companies (-26), and Federal and state parliaments (-23).

“The message here is clear — those who are seen to be working selflessly for others are generally more trusted,” Mr Burrell said.

“If corporations like the banks and other financial institutions continue to be exposed for pursuing profit to the detriment of their customers, we can expect confidence in them to drop even further,” he concluded.

About the Governance Institute Ethics Index

The third annual Governance Institute Ethics Index studies Australians’ attitudes and perceptions of ethics across a variety of organisations, occupations and situations.

The research was conceived by C3 Content and is conducted by independent global market research firm Ipsos between 25 May and 7 June 2018.

The sample size of around 1,000 was drawn from across the country and spans the political spectrum.

About Governance Institute of Australia

A national membership association, advocating for a community of 40,000 governance and risk management professionals from the listed, unlisted and not-for-profit sectors.  Our mission is to drive better governance in all organisations, which will in turn create a stronger, better society.