Interview: Kane Blackman FGIA: Building a career with a commercial mind and a social heart

We speak with Kane Blackman FGIA, the incoming CEO of the iconic WA social enterprise Good Sammy Enterprises about how careers can balance professional and personal advancement with a sense of purpose, the modern paradigm for business and the invisibility of disability. 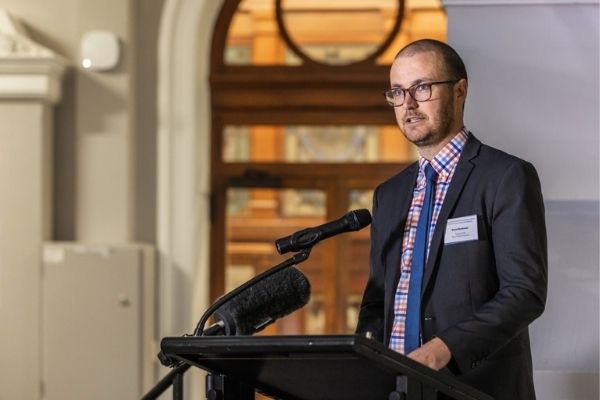 If you ask Kane Blackman, the incoming CEO of the iconic Western Australian charity Good Sammy Enterprises, what kind of leader he wants to be, he says, ‘I want to have a commercial mind and a social heart’. This he says are the sort of people you need in the business. ‘You need to employ clever people who have the heart and the head skills.’

Kane connects this to the modern business paradigm where social and environmental licence and a broad stakeholder universe have become anchors for mission, purpose, and success. ‘Milton Friedman said the business of business is business. For many generations that has been the core reason for the creation and continuation of a business. I think the modern paradigm has recognised that there are broader connections and relationships that are required, to continue to operate. There has been an awakening of people’s understanding of the importance of their stakeholders. Because if your key stakeholders are not kept in the loop, consulted, engaged with and if you do not look for opportunities to deliver mutually beneficial outcomes, then they are going to wield their influence, which will impact your shareholders. So, you need to look at the entire universe of stakeholders and shareholders. For this you need people in the business who understand the commercial model but then can really understand the universe of stakeholders, for example, the Indigenous communities whose lands they operate on, the inclusive societies they operate in, the diversity of their customer bases, the environment they impact and a whole range of other factors when considering the success of a project.’

An executive career in consulting, private equity, resources, financial services and public sector, and board roles in multiple NFPs and charities and community organisations have together forged his insights on the business of business. That thinking has also been deeply influenced by his personal life and experience.

Kane will commence his role as CEO of Good Sammy Enterprises on 14 February, Valentine’s Day, which he says is fitting given how much he loves the work that enterprise does and how keen he is to bring his commercial and technical acumen and his personal lived experience to the work that the organisation leads.

A job gives a sense of purpose

‘My passion is in improving the lives of people with disability. That really has been born out of my eldest son receiving a diagnosis of a rare disease five years ago. That diagnosis opened my eyes up to all Australians with a disability, the challenges they face, and the changes that we need to make in our society to improve their everyday encounters, their independence, and employment opportunities. Good Sammy’s core mission is about providing meaningful opportunities and employment pathways to people with disability.’

It’s been a long journey says Kane to get to his first substantive CEO role. He embarked early on his work journey, when his family taught him the value of work. ‘I’ve long recognised that having a job gives a sense of purpose. It helps form your identity and enables social inclusion. It delivers financial independence. And it is something I wish for all people irrespective of ability or age. But not everyone has the same ability to do that.’

Kane’s career started with consulting in the resource industry. He worked with mining and oil and gas clients to help them obtain development approvals in Australia, Papua New Guinea, South America and Asia. ‘My role was to secure social and environmental approvals, and public relations. So, engaging with local people, communities and state and federal governments. I worked with companies to understand the impact of their activities on the environment and on people. And developing the mitigation actions so that there was a mutually beneficial, win-win relationship for the companies and their stakeholders.’

In 2006 Kane received a phone call seeking his expertise for a company which was in the midst of an environmental crisis. That company was Magellan Metals. Thousands of birds had died in the Western Australian port town of Esperance due to lead poisoning. Magellan had exported over 10,000 tonnes of lead through the port in that year. ‘I was asked to help the clean-up of the port and to oversee a team that would remove the lead that was stored there.’ Kane was then appointed as a senior manager to rebuild the trust in the organisation, to come up with a sustainable handling of transport regime, to then secure fresh state government approval. ‘After two or three years in the role, we came up with a new best practice container handling process; double bagged in clean containers for shipping overseas. We became the first company to do that and went on to obtain our social licence and our environmental licence to operate again’.

This was a hugely polarising crisis in Western Australia which the then Premier Colin Barnett called the second worst environmental disaster in the state’s history behind the Wittenoom asbestos disaster. There were breaches of the Environmental Protection Act which led to the disaster and a Parliamentary Enquiry was set up to investigate it. To start from that point of a catastrophic disaster and then rebuild the company, to regain the trust of the people and secure the new licence to operate was a huge achievement. It was because of his leadership on this that the private equity firm The Sentient Group invited Kane to go work for them on multiple projects around the world including China and Argentina in the resource sector. He was asked to oversee project performance around the social licence to operate, environmental licence and risk and sustainability frameworks.

‘I enjoyed the work, but I was missing a sense of purpose. My wife Sarah and I decided to return to WA. I started work with the Insurance Commission of Western Australia as the senior executive head of public relations, strategy, risk and compliance and the company secretary. The Insurance Commission delivers critical insurance services and cares for people injured in car crashes and at work. I was very focused on bringing about a cultural change in the organisation in how we dealt with customers. At the centre of each insurance claim was someone who had gone through a life changing injury, who we needed to engage with and talk with to understand their goals, put a treatment plan in place, and how to get back to work, get back home, get back to the community.’ Kane worked on the opportunity to improve claimant outcomes, which involved the creation of the catastrophic injury scheme in Western Australia for people with brain and spinal cord injuries where they would provide lifelong care.

It was around this time five years ago that Kane’s older son received his diagnosis on Angelman Syndrome. This was a turning point for Kane. ‘I started to see a blending of personal value led passion with a professional commercial and technical skill. During that time, I completed the Graduate Diploma in Corporate Governance and joined the Governance Institute WA Council. I started to take board and advisory positions on organisations that have a health and disability and societal focus. Previously I was taking on professional roles for personal and family advancement. It was only from the Insurance Commission of WA and now with this new role as CEO of Good Sammy that I am truly living a passionate and purpose-led journey.’

The diversity discussion has not played out in the disability space

We’ve long recognised, Kane says, that diversity is key to building a sustainable business, in having people who look and sound different around the table. But that hasn’t always played out in the disability space. There are 4.4 million people in Australia with a disability. Which accounts for one in five Australians. Yet the number of people with disability between the ages of 18 and 65 that are able to find work is significantly under the proportion of people without disability.

Reflecting on his young son and other people that he meets with disability, Kane says we have for too long focused on the medical model of disability, in our efforts to reduce barriers for people with disability. ‘We need to focus on the societal model of disability. Because our buildings, our walkways, our businesses, our recruitment practices are the ones that aren’t inclusive. That is where the real barrier exists. Not in the person who wants to go for a job but is held back by the lack of inclusiveness.’

Good Sammy Enterprises is a leading light in this space in Western Australia and nationally. They have 700 employees of who over 300 are people with disabilities. ‘There are lots of organisations that will help people with disabilities get a job in another organisation. Good Sammy also does that. But they have their own commercial and retail businesses, logistics, waste management, training, and recruitment businesses, where they hire people with disability on those large ratios. They are also very commercially minded and know that you need to deliver both sustainable financial performance and purpose at the same time.’

Kane believes that Australia’s workforce culture is evolving in terms of enabling full and meaningful participation for people with disability. But the pace is slow. ‘Companies will develop disability and inclusion plans with various actions to complete. However, one of the actions that needs to be the focus is recruitment. It’s one thing to have a policy, or training or to do staff surveys but you need to be actively willing to seek and employ people with disability. And employ them in the same proportions that they exist in society’.

The invisibility of disability

The development of such a meaningful and inclusive workforce culture then also has an implications for the levels of aspiration and ambition among people with disability. It also impacts the aspiration and ambition of their families for them early in life. ‘It starts at the very beginning of their life. The fact that we do not have inclusive education in Australia. We have public schools; we have education support centres and special schools for people with disability. And so, the rest of Australia in their mainstream education does not get exposure to people with disability. From the very beginning if you have a disability you are not seeing all the people in your community or engaging with them meaningfully. That then plays out in the sporting clubs you join, the jobs that you take, the friendships that you have, the girlfriends and boyfriends that you have. We need to break down those barriers.’

At present in Australia, we do not even test at birth for a whole range of rare diseases and disabilities where we should. We have the technology through newborn blood screening to be able to test for instance for Angelman’s Syndrome which Kane’s young son has. But it is not occurring now because it represents a small number of people who will have the syndrome. ‘We are making financially based decisions about knowing someone’s diagnosis or not. And that means that families aren’t connected to the supports that require very early on to improve the independence of their children with disability or to access the types of treatment they require. There is this invisibility of disability from the very beginning. I recognise that it is a marathon and not a sprint for our system and our thinking to change. But we need to address the fundamentals of early education and the visibility of disability.’