Australian adventurer Tim Cope talks about how intrepid journeys helped him script his own life. 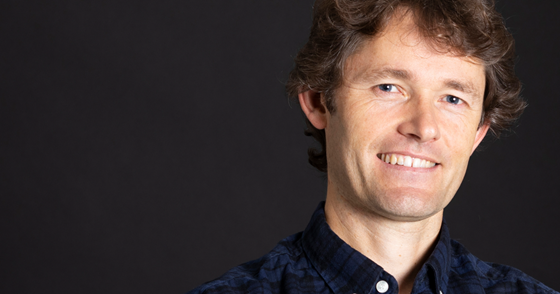 On a morning in June 2004, a man and three horses set off on a 10,000km journey across the Eurasian steppe, retracing the trail of the Mongol Emperor Genghis Khan, from Karakorum in Mongolia to the Danube River in Hungary. Five days into the journey, two of the horses were stolen. The Mongolian nomad who returned the horses to the frantic traveller the next morning told him ‘A man on the steppe is as narrow as a finger, and a man on the steppe with friends is as wide as the steppe.’

For the young Australian adventurer Tim Cope, who had cautiously stayed away from the local tribes for the first few days, there was a valuable lesson in those words. To survive the steppe, the thousands of kilometers of open desert, plains and craggy mountains that stretched from Asia into Europe, he would have to understand and connect with the land and its people. That lesson held him in good stead for that journey and for every other one since.  When Tim set out on his horseback adventure, he planned an 18-month journey. Little did he know that it would take him three years and a lifetime’s worth of experiences.

The courage to walk your own path

Though he was only 24 when he set off, Tim Cope was a veteran of many expeditions by that time. The outdoors was in his blood. ‘I grew up in the country town of Warragul in Victoria surrounded by nature. My father was an outdoor education teacher. And I vividly recall some of those early childhood experiences bushwalking, sea kayaking, surfing. I can recall from back in those days a sense of being on the cusp of this opportunity, to write the script of my own life. To be able to break away from the human constructs that are usually part of our daily lives. But also, you had this feeling that you had no idea what lay around the corner. And when I think back to it, it is that same fine line, that wire that you need to tread - on the one hand having the courage and conviction to walk your own path, to take those leaps of faith, to break away from what is conventional; on the other hand, being open to the unexpected. To be able to constantly anticipate and embrace the unexpected. That is something that was drilled into me from a very young age. I would not have had the language to express it back then of course!’

When he finished school, Tim did not know quite what he wanted to do. He started a degree in law but then took a year off and ended up working in England. While there he would often set off on hitchhiking adventures into Eastern Europe and further afield. He was able to indulge his love of adventure and his love of writing which he had nurtured since when he was ten years old. ‘When I then came back to Australia to restart my studies in law, to be honest it felt to me like a death in life! And I had this wonderful opportunity come up to go and study to be a wilderness guide in Finland. And that turned out to be this incredible year training in the Arctic, learning traditional survival skills.’

There was something he learned there that really affected the way in which he approached travel and life in general from then on. ‘There is a word in Finland that they use to represent wilderness. Era. Era is an old word to describe an area of land that a particular family or clan might have rights over to utilise the timber, to hunt, to fish, to collect the berries and the mushrooms, to cultivate. It made me realise that what we often call wilderness is the environment that we all come from. It’s the land that sustains us.’ Intrigued by the things he learnt about the local people during that time in Finland, Tim wanted to understand more about cultures that were very different to his own. To be able to step into their world and look at life through their eyes. 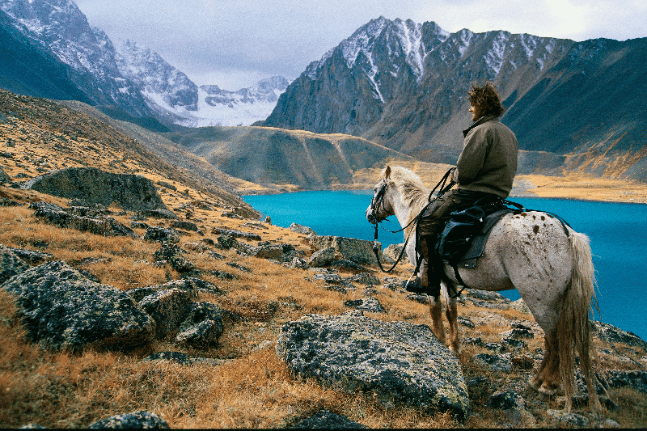 Always try to be more curious and less offended

After Finland, Tim and his friend Chris Hatherly took off on their bicycle tour from Moscow to Beijing. Oddly enough, it was in the middle of this trip that he got the idea about doing the Genghis Khan trail. ‘Every now and then a team of nomads would appear out of nowhere, galloping our way. They’d often bring us a handful of dried curd or a swig of fermented horse milk. And the off they would go, leaving us in the dust. We were tourists pushing our bikes through a land where it could be anywhere from -40 to -50 in winter to +50 in the summer. But these nomads lived here. They had only a couple of inches of tent felt, to insulate them from those extremes. But it struck me that these people live in a world that is extremely free. A place where there are no fences for thousands of kilometers. Where people lived to the rhythms of the land. Only owning as many possessions as they can fit on the backs of their animals as they go from place to place. So, a lot of my assumptions about life were being turned on their head.’

It was this experience that made him curious about Genghis Khan and he studied more about him before deciding to embark on his trail. ‘Genghis Khan became the emperor of what is still the largest contiguous land empire in history. But he was a nomad. When we imagine an emperor, we often think of someone in a castle, on their throne. He was a person who lives his life on horseback and in a tent. It struck me that there is so much about this nomadic life that is different to what we know, than meets the eye.’ Tim thought that the only way to really experience and understand their way of life was to get on a horse and ride through this cradle of nomadic civilisation, on their emperor’s trail to Europe.

In an urbanised world, Tim says, we have become very fractured from the natural rhythms of our land and environment. ‘What I like about adventure and travel in these very different places, is that I am able to step into environments and cultures that initially are alien. Initially they are places where in the conventional western concept of wilderness, humans don’t belong. But to come to know a place on its own terms, to know cultures on their own terms, suddenly you get a sense of familiarity. I remember something my editor told me after my Mongolian journey, in your writing just like in your journey, always try to be more curious and less offended.’’ 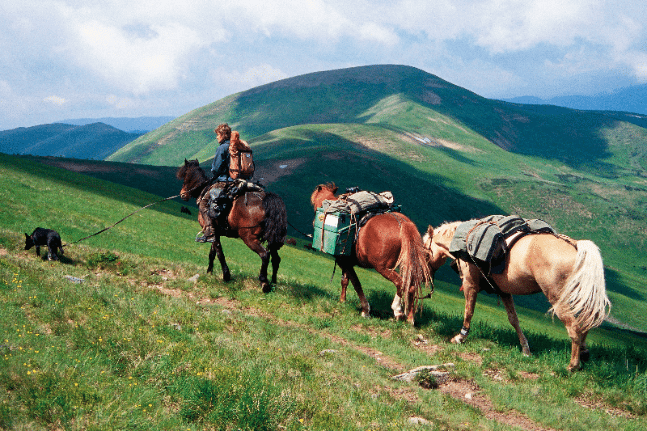 Mountains never meet, but people do

One of the biggest challenges during these trips is isolation. Tim recalls the times in the extreme summers on the steppe when the heat was in the high 40s and he would try to rest during the day and travel in the relative coolness of night when the world around him was asleep. ‘I’ve never felt so isolated from my family and friends.’ But he found a way of coping. ‘I would lather sunscreen on my face in the evening before setting off. Which sounds a bit nonsensical, but the smell of the sunscreen became a little bit like an emotional armour in those times of isolation. It brought me back to times of togetherness with my family. I understood more than ever the preciousness of relationships with close family and friends. There is a saying in Kazakhstan that mountains never meet, but people do. And that is not a saying that would have meant much to me before this journey. But by the end, it was the one that affected me the most. It would be fraudulent of me to suggest that I rode from Mongolia to Hungary alone. It was a solo expedition but made possible by the hundreds of people who gave me their knowledge, their hand, a place to sleep. So, having the ability to make friends, that quality of being able to make friends with the unfamiliar is very important.’

Tim also reflects on another aspect of his travels that he carries with him. ‘For long periods during my travels I didn’t have the opportunity to meet anyone that was familiar, or I had a history with. And often I did not get to pick and choose the people I befriended. In each situation, I simply had to make the best of what was before me. And that always involved appealing to the better side of human beings. That is something that I have tried to carry with me. I think that the tendency in our society is that we are often too risk averse with the people that we reach out to and make connections with. Some of the people that I learnt most from were the people that were most different to me. People who challenged my philosophies, who challenged my assumptions about life. Each time I got stuck in a place, needing help, I had to appeal to that better side of human beings. Funnily enough it always worked. And I was able to extend myself and learn and grow from those experiences.’

One of the days he will never forget was when he was navigating some dangerous territory; his horses and him clinging to the edge of a gorge. ‘This lady casually came down from the landscape of sheer rock and ice leading six camels packed to the hilt. She stopped and while we talked revealed her little baby, tucked into the back of one of the camels. I was stumped. And incredibly humbled that these people are so in tune with their environment. They probably put more trust in those camels entrusting them with their precious loved ones, that we would with a human being.’ 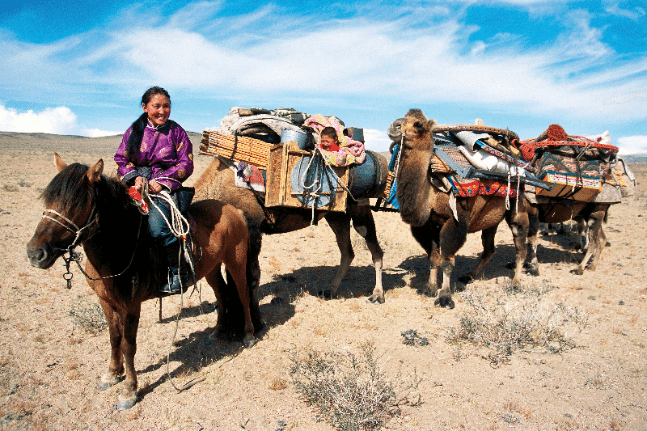 In the years since his Mongolian expedition, Tim has returned to the steppe each year leading groups on treks and expeditions there. When he leads his teams, he says, for most part he leads from behind. ‘As a leader you want people to have their own experience, not micro-manage their experience. You want them to experience the breadth of the environment, the risks. You want them to feel the very edge of those mountains, the wind, the very different cultures.’ But it is always crucial for the leader to recognise that there are times when they must rise and lead from the front. ‘But later when the risk or danger or challenge has passed then once again you empower the people you are leading with knowledge and your trust in them and return to gently leading from behind.’

One of the reasons Tim keeps going back to Mongolia, is that when you are living closer to the natural rhythms of the environment every single day, it is impressed upon you that you are part of a much bigger web of life. ‘On the one hand it can make you feel like you are this insignificant tiny being in this enormous universe. But on the other hand, it is this empowering feeling. Because you recognise what an important role, we as humans can play and must play. It’s where we belong.’

He will deliver the risk keynote at the Governance and Risk Management Forum in Melbourne on 21 May 2021.