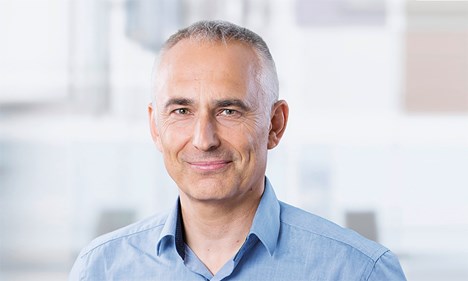 Klaus Moosmayer did not plan a career in compliance. He started as a lawyer. His career in compliance commenced in 2000 at Siemens AG where he was Corporate Legal Counsel on the internal compliance taskforce. This was at a time when the organisation was reshaping its compliance policies after a major corruption scandal. In 2007 he took on the role of Compliance Operating Officer, later on Chief Counsel Compliance and in 2014 became the Chief Compliance Officer leading the transformation of the compliance framework. ‘If you want to be part of the solution you must take any opportunity that is offered to step up and lead’, says Klaus.

‘I stepped into the role in the midst of a crisis. But I believe the bigger challenge comes after the crisis. A crisis is like a war. You lose or you win. But it is afterwards that you help to rebuild the organisation and make it sustainable with good governance. That is the challenge — after the crisis.’ His focus then was to take the compliance function to the next level, after the firefighting and clean up, to that of a trusted provider of assurance.

Not surprisingly when another global organisation was in the midst of a cultural transformation under new leadership, Klaus was a natural choice to join the team. He joined Novartis AG at the end of 2018 as a Member of the Executive Committee and as Chief Ethics, Risk and Compliance Officer.

The philosophy behind unbossing is that of servant-leaders who put their teams’ success above their own. It is also predicated on the idea that modern employees work best when their leaders create opportunities for them to commence their own leadership journeys. That collaborative effort driven by purpose is more effective than conventional hierarchical and purely profit driven models.

‘Its intention is to give people clarity — about the goals they are all working towards. And about the accountability for each of them to live it and to implement it. So, it’s about clarity on the one hand and then accountability on the other.’ However, the legacy of the company which is heavily focused on science had been quite different. ‘The feedback I had received after joining Novartis was that it had until then been an organisation with a high-performance culture that was also very hierarchy oriented. Unbossing allows people to contribute more democratically. But you have to prepare your colleagues for an unbossed culture. Culture change is not about changing the company motto from one day to the next — to say suddenly that everybody is unbossed and should get on with it.’

Unbossing is about leaders putting teams’ success above their own.

With this in mind the company has launched a global leadership program starting with the top 300 leaders including the Executive Committee called the ‘Unbossed Leadership Experience.’

‘The concept of unbossing also implies that you are open for feedback and criticism. It is very important to speak up. But the biggest enemy of this culture change is the inability to take criticism. And this is an issue which we have to constantly work to overcome in the company. This is not a culture the company was used to. If you look at the engagement of associates (staff) which we have now started measuring every few months, in the last year alone it has been much greater. Novartis has over 100,000 associates. The focus has been on speaking up and openness. So, this unbossed philosophy will elevate and engage the staff in an open dialogue throughout the company.’

Klaus Moosmayer joined the Novartis after ethical legacy issues had damaged its brand and reputation. ‘It is important to work on legacy issues. And not to be silent on them. And from a risk and governance point of view it is important to learn from past mistakes. Another piece of advice I got when we were in the midst of the Siemens turnaround was — don’t over promise and stay humble.’ Klaus points out that these turnarounds from massive legacy issues do not happen overnight. It takes work to regain the trust of society. ‘Also, you need to really bring the culture and ethics topics into the company strategy. If you leave culture only to the compliance or the ‘experts’ to manage it will never work.’

That cultural change is something that takes time to percolate. ‘People who are used for years or decades to a certain management style are understandably questioning us. They need practical examples and lighthouses to support change.’ Given the nature of the pharmaceuticals industry, Novartis is very much a data-driven company of scientists. Measurement and metrics are a part of all processes including culture change. ‘So, we have to measure the engagement of our associates to show the clear results. This gives good feedback to them. For us it gives us clear indicators of whether the strategy is working or not.’

A code of ethics cannot exist apart and alone; it must be embedded in the organisational ecosystem

Reflecting on the pillars of a meaningful and successfully implemented code of ethics, Klaus says that collective ownership is what will drive accountability.

The first pillar he cites is co-creation. ‘People are understandably sceptical about new company policies. So co-creation of new policies is important. Only if you own it will you make it your own destiny. So, when starting to work on a new Code of Ethics for Novartis, we tried an exercise of crowdsourcing, of engaging the whole organisation in framing our new ethics code. And then having been part of the decision-making every associate is now accountable to live that code of ethics.’ This concept of co-creation was used to develop a Novartis Code of Ethics, replacing their Code of Conduct from September 01, 2020. More than 2,500 associates took part in an early-stage crowdsourcing exercise while another 1,500 participated in a global conversation on the ethical dilemmas at Novartis. Finally, during the global Ethics Week early September, when the new Code of Ethics was officially launched, thousands of associates participated around the globe in the related activities, including an ethics commitment challenge involving all functions, units and countries.

‘Secondly the code of ethics cannot exist apart and alone. It has to be embedded within the organisation’s ecosystem. It should be fully embedded within the human resources system. Are the incentive system and performance system linked to the code of ethics? Is it part of hiring processes? We call this hiring with integrity. So, if the code of ethics is linked to the hiring process, to the promotions, then the code is well on its way to being real. Equally important is diversity and inclusion. We put human rights, diversity and inclusion at the centre of the code which our associates have greatly appreciated.’

Novartis’s commitment to diversity and inclusion was recognised recently when they were ranked ninth in the overall top 100 and first in the global pharmaceutical industry in a global diversity survey conducted by Refinitiv.

‘Then you have to attack the ethical iceberg. Because in the ethical iceberg you can see the upper part, the peak. You can address those big ethical issues at the top with policies and debate and discussion. But the big part of the ethical iceberg is below the surface. And that is where we find our own biases. There you will find the contexts by which you have been living, driven by your own unconscious biases. That must be addressed if change has to be sustained.’

Reflecting on the global pandemic and the risk horizon, Klaus says that when we are in a crisis-fighting mode we are often too occupied with day-to-day survival instead of the big picture. ‘One of the biggest questions as we come out of the pandemic will be whether we are still committed to a globalised world with all the risks and opportunities that presents. The pandemic cannot be solved by a national approach alone. However, we see a lot of voices calling for nationalised supply chains and production. But we at Novartis truly believe that to challenge the pandemic and find a solution it has to be a global effort. We have to find the right mechanisms for this.’

Putting on his hat as Chair of the Anti-Corruption Task Force of the Business and Industry Advisory Committee at the Organization for Economic Co-operation and Development (OECD), Klaus points out that we need multilateral platforms more than ever before. The G20 and its business arm the B20, the OECD, and the United Nations. ‘These are platforms that enable anyone to talk to each other. From the public sector point of view. From the civil agencies. From the private sector. Civil societies, thought-leaders, NGOs. We need to maintain these platforms. They are easily criticised. But in the end, they are the drivers of dialogue.’

The B20 and C20 (Civil Society 20) are currently working on a joint declaration between business and civil societies. It focuses on the rule of law, gender equality and the fight against corruption. ‘On the United Nations side there is concern that human rights standards will be compromised by government. Unfortunately, governments in some countries want to rebuild the economy by lowering human rights standards. We as industry have to be committed not to accept this and to fight for good and holistic human rights.’

‘There are a lot of dilemmas for decision-making in times of crisis. These dilemmas apply not only to governments but to citizens, business leaders, to us as parents as friends as family. Because we have to make ethical choices during a crisis. How protective are we those who need it? How do we behave in a way that does not put other people at risk? Each of us has a responsibility.’

Equally there are ethical dilemmas on how to direct resources as we head into the next phase. For instance, there are potential dilemmas for the pharmaceutical industry on where to direct resources. ‘Do we put it all into the pandemic or do we continue to support the hundreds of millions of people who suffer from cancer or heart disease or other diseases? There is also the question of access and distribution. If a vaccine comes how will it be distributed? Between countries, in societies, between the poorer and richer populations.’

On the other hand, Klaus says there are opportunities. ‘If we do it right, we can make a big difference environmentally to the planet after the crisis. We all see what we don’t need. We can live in a different way. And that is one of the biggest opportunities for us at this time.’