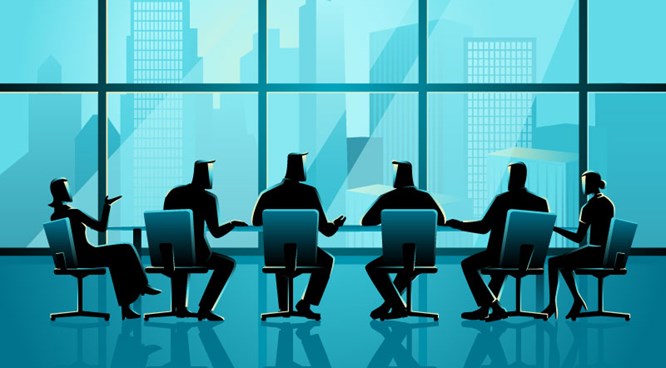 Shareholder grievances linked to externalities associated with the banking and financial services sector persisted, climate change deniers are finding themselves increasingly isolated in the face of observable realities, whilst shareholder opinion on the appropriateness of pay-for-performance remuneration structures remains wide open.

It is within this context that Jean-Baptiste Alphonse Karr’s most frequently quoted phrase comes to mind: ‘plus ça change, plus c'est la même chose’, which roughly translates to ‘the more things change, the more they stay the same’. When reviewing aggregate shareholder voting outcomes over the 2019 AGM period (and generally over the 2019 calendar year) one might easily conclude that, with only a handful of exceptions, the ESG investment and engagement considerations of institutional shareholders are doing little to materially alter the status quo for their voting directions.

In reflecting upon 2019 Annual General Meeting (AGM) voting season1 outcomes we focus on the Australian domiciled constituents of the S&P/ASX 200 index2. For comparative purposes, a select group of companies have been excluded, and the index constituents are held constant for comparable periods.

Institutional shareholders and their governance representatives continue to emphasise in their engagements with companies their focus on enforcing non-executive director accountability.

Traditionally a vote against a director has often been cast to signal concern for ‘tick the box’ structural deviations from board composition recommendations of the ASX Corporate Governance Council or proxy adviser policies. This governance engagement strategy could characteristically be described as the ‘offer you can’t refuse’ approach. Consider director independence quotas for example; ‘if your board does not constitute X per cent of independent directors — under our definition of director independence — we will consider voting against the Chair of the Board (or Nominations Committee).

How boards have responded to this engagement approach is variable, but this tactic came about due to continuing disclosure transparency (or rather lack thereof) regarding the suitability of non-executive director candidates. What remains limited to brief resume-like biographies or uninspiring and often opaque board skills matrix disclosures provides challenges for shareholders in developing an independent and informed opinion on director suitability and their performance in a non-executive capacity.

By contrast, one now tends to observe alternative messaging when shareholder representatives are engaging directly with company directors, which has translated into an increased willingness to bring operational and financial performance considerations into the governance conversation. Australian governance engagement teams and proxy advisers are spending more discussion time focusing on strategic and investment matters, sometimes spending the bulk of engagement sessions considering targeted questions anchored in the abyss of the annual financial statements notes; ‘Mr. Chairman, in regards to Note 28, this amount for (X) million dollars in provisions, compared with this balance in the previous year, and you communicated (Y) in this announcement, can you please explain?’ Where these questions are not sufficiently satisfied, Australian company directors are increasingly aware that they may fall subject to the shareholder firing squad.

It is therefore intriguing to observe little, if any, year-on-year variability in director voting dissent lodged by institutional shareholders during the 2019 AGM season and that would have otherwise been consistent with a growing emphasis on director accountability. 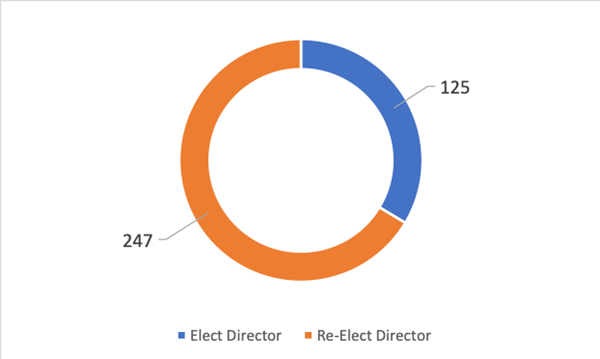 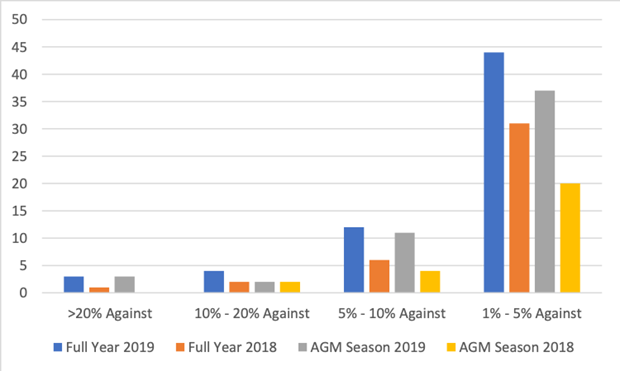 If held to a voting count standard, the figure implies that shareholders are overwhelmingly content with the performance of nine out of every ten company directors.

With such minimal change and relatively low rates of voting against director candidates, and given that not one board-endorsed director candidate across the largest 200 companies in Australia was stood down on a majority vote of shareholders in 201910, shareholder voting on board nominees is not the most desired method that institutional shareholders are currently leveraging to express their dissatisfaction. Plus ça change, plus c'est la même chose.

There has yet to be a successful spill of an S&P/ASX 200 board of directors under the 'two strikes' legislation since its introduction to the Corporations Act in 201111. Irrespective of this, executive pay for performance alignment continues to remain a thematic of the Australian AGM season, with 12 of the 14 remuneration report ‘strikes’ observed amongst the S&P/ASX 200 occurring during the 2019 peak voting period12 (for 2018 this was 13 and 15 strikes, respectively). 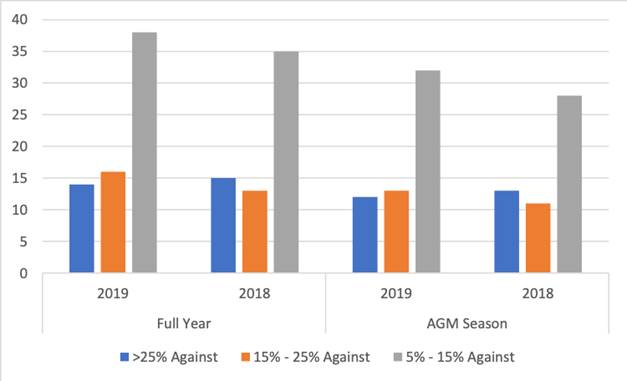 What the general consistency in remuneration report voting dissent across 2019 and 2018 does indicate is that (a) companies continue to struggle to keep pace with the demands and wide expectations around executive compensation arrangements, and (b) some shareholders continue to leverage the unintended consequence of the 'two strikes' legislation by voting against the annual remuneration report when displeased with aspects beyond remuneration and often in the presence financial or share price underperformance.

With proportionate rates of dissent on individual director elections remaining generally negligible, the remuneration report vote nevertheless continues to exist as a motivator for open and extensive engagement between company directors and governance stakeholders. Oftentimes these engagements move beyond remuneration aspects and encompass a wide variety of ESG considerations. 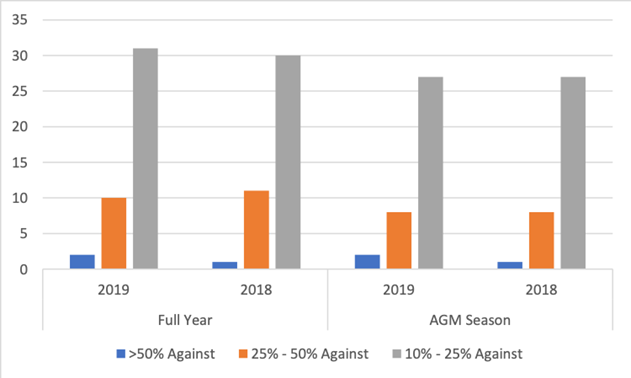 When it doesn’t count

It is baffling to observe some companies continuing to disregard the principle of ‘one share, one vote’ when conducting an AGM. Shareholder democracy and governance best practice dictates that all votes should be conducted by a poll and not upon a show of hands. Those companies that continue to apply this archaic voting method do so at substantial reputational risk.

Companies that allowed for a vote passed on a ‘show of hands’ in respect of the shareholder vote to approve the annual remuneration report across the S&P/ASX 200[i] during the 2019 AGM season includes: Codan Ltd, Freedom Foods Group Ltd, IDP Education Ltd, IPH Ltd, New Hope Corporation Ltd, Pro Medicus Ltd, Perseus Mining Ltd and Zip Co Ltd. In fairness, it should be noted that as indicated by the proxies received, none of these companies would have otherwise incurred a remuneration strike.

There was a total of 19 shareholder proponent resolutions put forward by environmental and social activist groups and co-signatories to select ASX/S&P ASX 200 constituents during the 2019 AGM season14. Of this – 17 resolutions related to climate change considerations and the balance covered supply chain and human rights risks. It should be noted that the resolution put forward to the Origin Energy Ltd 2019 AGM regarding industry association memberships was withdrawn before the meeting was held, indicating that some compromise had been reached between the company and the Australian Centre for Corporate Responsibility (ACCR). 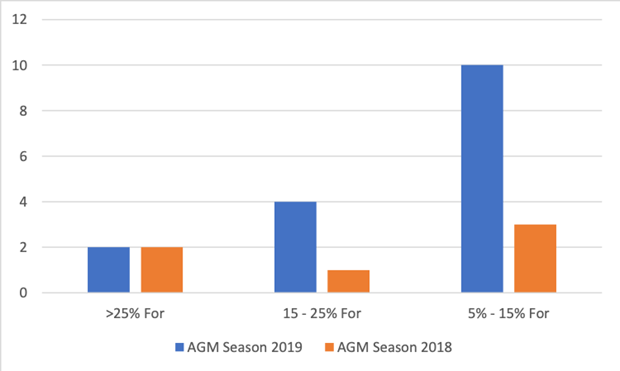 Irrespective of the observable increase in voting support for ESG-related shareholder resolutions in 2019, no resolutions received more than 35% of votes cast in favour. The highest vote recorded was in favour of a climate change transition plan for AGL Energy Ltd., which was voted down by 68% of votes cast. Plus ça change, plus c'est la même chose.

As institutional investors often remind their clients, ‘past performance is never a predictor of future performance’. There is scope for 2020 to mark a turning point in how institutional shareholders (and their external proxy advisers) refine their governance engagement tactics with company representatives to better reconcile with their voting directions (or recommendations). Otherwise, company directors are right to remain sceptical of shareholder voting intentions in an environment where the more things change, the more they stay the same.

Michael Chandler can be contacted by email at mchandler@sovereigngovernance.com.au.