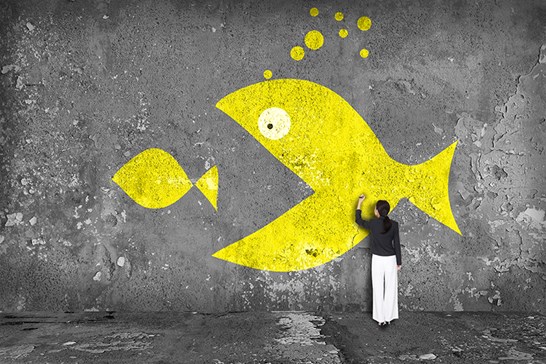 Mergers and acquisitions have become a natural part of the not-for-profit landscape with more than twice the number of organisations considering a merger than was the case ten years ago. While they bring the promise of greater efficiencies and better service delivery, they also pose the risk of smaller entities being swallowed up by their larger and more powerful merger partners.

So how do boards and executive teams ensure their merger doesn’t inadvertently become a takeover, gobbling them up rather than enabling them to become a fresh entity with a shared and exciting new identity?

To successfully answer this question, I spoke with 15 directors and CEOs from leading Australian NFPs to learn more about their experiences of merging1. Did the merger process and the result meet their expectations? What worked and what didn't?

I also conducted additional online research of five other NFP merger transactions — some of which went ahead — and drew on my own 20-year experience in the business consulting sector.

All of those I interviewed reported both good and bad merger experiences. Some transactions met or exceeded expectations, whilst others were considered abject failures. However, every transaction was a learning opportunity, providing valuable insights into how to merge successfully.

I have distilled these qualitative discussions and my additional research into six best practice M&A tips.

I trust these tips will assist other NFPs avoid some of the potholes on the merger highway and achieve the outcomes they were hoping for.

Understanding and agreeing on the position early in the process means you are less likely to give up what's important, simply to get the deal done.

I know how easy it can be to get caught up in the excitement of a possible merger and rush ahead without truly considering why the merger should happen in the first place. However, you do this at your peril.

The resounding feedback from the directors and CEOs I interviewed was that it is essential you know why you entering into a merger in the first place. What are the expected benefits? Why will your customers, clients and members be better off if you merge?

Even more important is that these WHY discussions are more than just a passing conversation at a board meeting. They need to be the subject of dedicated, focussed discussions which are regularly revisited throughout the merger process and during implementation.

2. Weigh up the benefits and risks

A merger is a strategic choice and one which provides many organisations the opportunity to better pursue their purpose and grow or adapt to a changing environment. While a merger may be a viable choice in the majority of circumstances, you will need to determine if it is the right choice for your organisation.

It is important to objectively and dispassionately consider all possible risks early in the process. A useful exercise is to develop the case against merging. This will ensure you have not only considered the benefits but also weighed up the negatives.

Of the transactions I researched for my study, around a third did not do this effectively. The result was a merger that didn't deliver the benefits anticipated and instead caused significant difficulties for the organisations involved.

So before embarking on your merger, ask yourself the following question – do the benefits and risks represent a better proposition than the alternatives?

3. Identity the deal-breakers early on

A merger, like any negotiation, will require some ‘give and take’. While mergers provide the potential for partners to derive enormous benefit such as cost efficiencies and improved service delivery, there can be a downside such as loss heritage or identity and reduced director or executive influence.

It is vital the merger partners discuss these issues early in the merger process, well before there is any significant commitment. This enables both parties to determine the point at which the merger no longer makes sense for one of the partners.

Mergers can be expensive and time consuming so there is no point spending significant resources only to discover there isn’t agreement over, for example, the location of the head office.

These discussions need to be detailed and honest, with the tough questions asked (and answered).

The key questions would-be merger parties need to be asking:

Once these questions have been asked, each party should consider their own position first and then come together to reach agreement.

Understanding and agreeing on the position early in the process means you are less likely to give up what’s important, simply to get the deal done. When you have committed a lot of time, energy and resources to a deal it can be tempting to agree to something that is more akin to a takeover.

4. Don’t scrimp on due diligence

As merger discussions progress, conversations are likely to become increasingly friendlier. Trust builds and it can be tempting to save costs and undertake a ‘light touch’ due diligence.

Don’t fall into this trap. Due diligence is about ensuring you know everything about your partner and that you have considered all the benefits and risks they bring to a possible merger. Are their financials accurately stated? What services do they deliver? Is their compliance up to date? Are their registrations valid? What is their culture?

Many of the directors and CEOs I spoke with during my research, felt that a more robust due diligence process would have helped them avoid what proved to be an unsuccessful merger.

What was saved in a ‘cheap and easy’ due diligence resulted in significant costs to rectify issues later on.

Keep in mind that conducting a thorough due diligence early on will also enable you to identify parts of the other party’s operations, strategy or culture that could become more dominant over time and hence reduce the sense of a merger.

Merging two entities also requires merging two cultures. Whilst both partners usually operate in the same sector and have similar clients, cultures can be quite different.

Even where the cultures are quite similar there can be a tendency to hold onto the legacy of the previous organisation. It is quite common to hear people refer to which side of the merger they were on months, even years down the track.

Sadly a clash of cultures can dramatically slow down the merged entity realising the benefits of joining forces.

Also where two separate cultures persist, there will be a tendency for one to become more dominant over time so developing one culture as quickly as possible is vital. This involves determining what that desired culture should be and developing a plan to ensure this happens.

Do keep in mind that interest in your proposed merger goes well beyond the boardroom table. It involves everyone from clients, employees, donors, government and members to a host of other stakeholders in your sector.

You must communicate your intentions with these parties because in the absence of this, rumours and misinformation will abound. This can lead to staff departures, member revolt or a loss of funding. Whilst much of the detail of merger discussions and negotiations must remain confidential, it is important to develop and implement a detailed communication plan early in the process.

Identify the relevant groups you need to speak with and ensure you control the conversation.

So, in response to my original question, can the board and senior executive team ensure their merger doesn’t inadvertently become a takeover and they achieve the outcomes they were hoping for?

Yes, they can, provided they put in the effort to ensure the reasons for the merger are clear, that these reasons are kept front of mind, that they don’t scrimp on due diligence and consciously make an effort to create one culture.

Material published in Governance Directions is copyright and may not be reproduced without permission. The views expressed therein are those of the author and not of Governance Institute of Australia. All views and opinions are provided as general commentary only and should not be relied upon in place of specific accounting, legal or other professional advice