Day Two of the National Conference started with a comprehensive presentation on the global political and economic environment by Lakshmi Shyam-Sunder, Vice President and Chief Risk Officer, World Bank Group. Lakshmi stressed how the current uncertain global environment calls for a more agile response. She noted that the Global Policy Uncertainty Index has been rising, highlighted by the changing world power dynamics as countries are “splintering”. 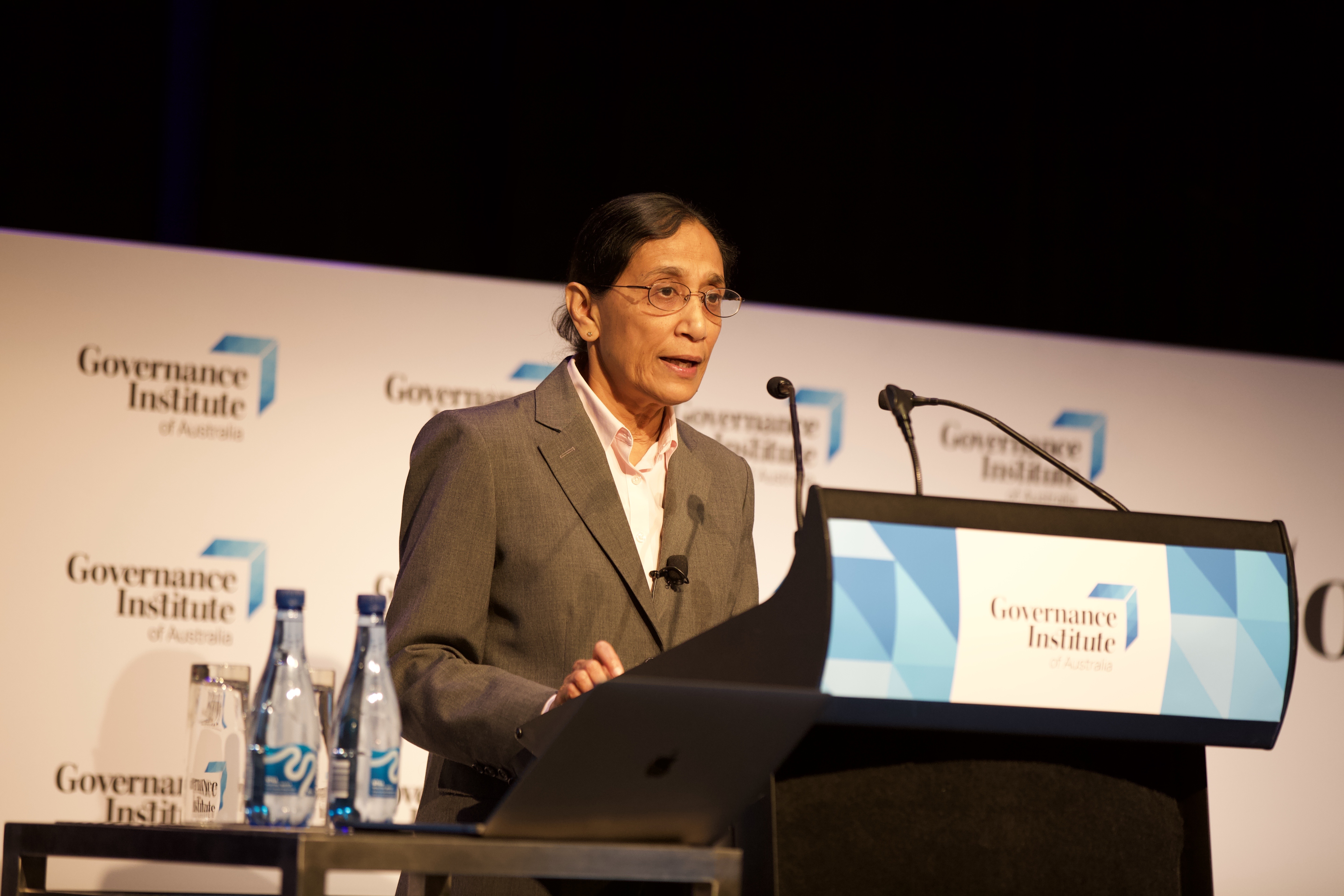 From a geopolitical risk perspective, trade and protectionism have been experiencing shifts. Lakshmi said that people are becoming more inward-looking and that Brexit, tension in the Middle East and political unrest in Hong Kong all present significant risks. She also noted the view that global order is breaking down and nationalism is taking precedence.

Lakshmi painted a cautious economic picture, indicating there had been a downward revision of global growth toward 2021 of below 3%. She offered strong warnings about the seriousness of the trade war with a sharp deceleration in exports and imports between China and the US which could get worse. For Australia, there may be some knock-on effects with 35% of Australia’s exports going to China.

Lakshmi responded to a question from the audience about how to prepare for difficult events. She responded that at the World Bank, scenario planning plays an important role and that the organisation is trying to be more agile in order to better respond to a changing global environment. In response to another question, she spoke to the economic impacts of technology and the disparity that can emerge between those who have benefited and those who are left out. She made clear that while automation can replace jobs, efforts in human capital project work, including investing in children are among “mixed bag” of responses for technology concerns.

Future of the workforce 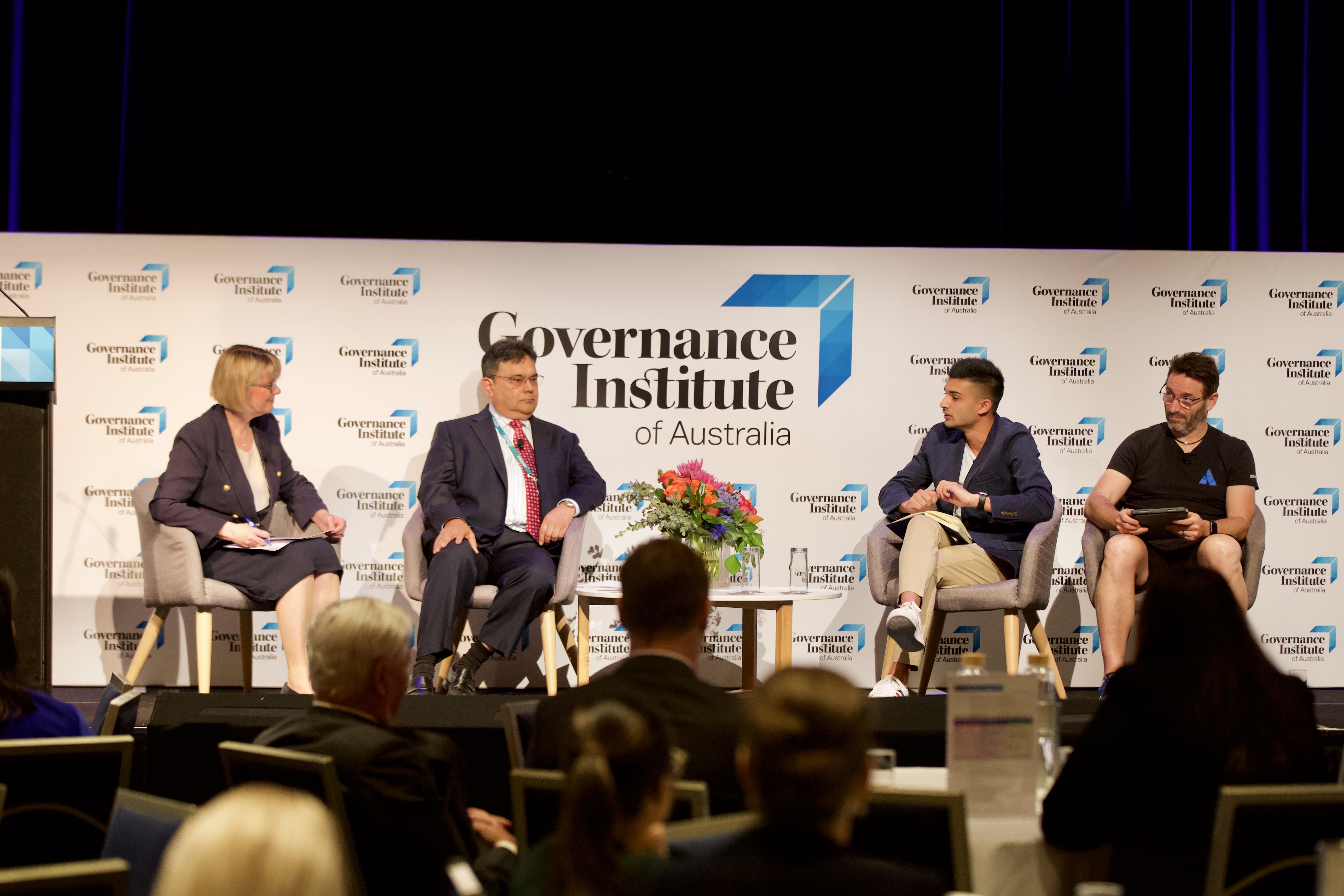 The future of the workforce session was an energetic session with speakers Nigel Ampherlaw, Guy Herbert and Taj Pabari. Mr Ampherlaw warned attendees about the “tsunami of technology” approaching them and that it’s important to figure out the role of the board would be. He also said that people are often playing catch up with technology when it comes to risk and governance. Nigel importantly raised that boards need to understand what their organisation’s algorithms actually do. 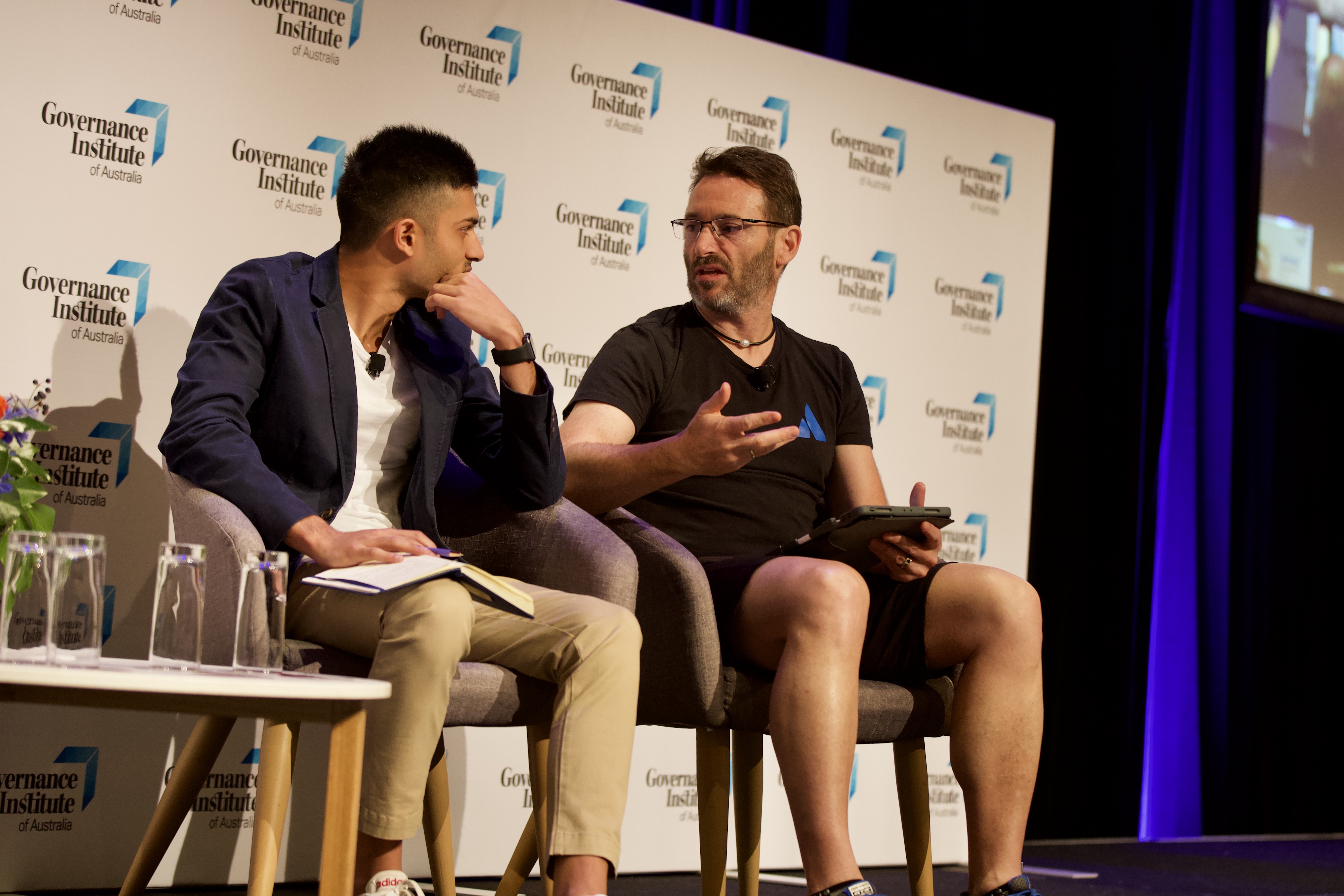 Taj Pabari, Chief Executive Officer, Fiftysix Creations continued the discussion to what classrooms should be doing now and into the future. Taj referred to his organisation and how it teaches “transferable and timeless” skills. He noted that this generation is very adaptable and are able to retrain and reskill easily. In outlining the essential soft skills for the next generation, he identified: collaboration, communication and critical thinking. He also made clear that his generation would be inheriting a lot of the challenges of current boards and encouraged greater representation of younger generations on boards. 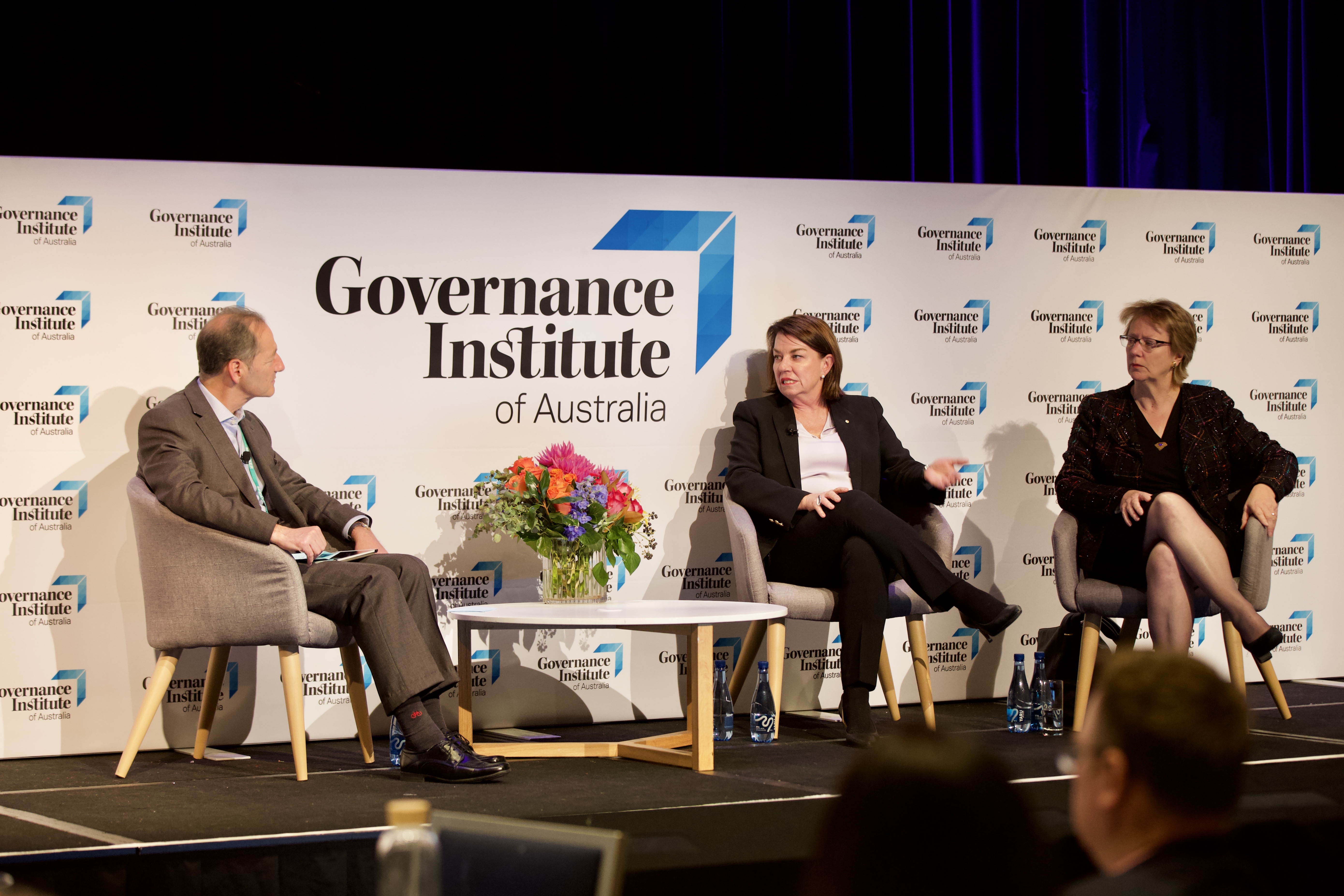 The design thinking in governance session was focussed on innovation driven by human centred-design and asked the question of how we adapt such thinking for governance.

It was mentioned that purpose can be truly transformational and is fundamental to everything a business does. Three questions a board should ask arising from this are:

The idea of purpose has not been focussed on enough by business and “profits are a by-product of delivering on purpose, not simply making as much product as you can as quickly as possible”.

Following, in a discussion about trust, Anna Bligh made a strong point that “trust is not a homogenous thing, it is multi-layered”. 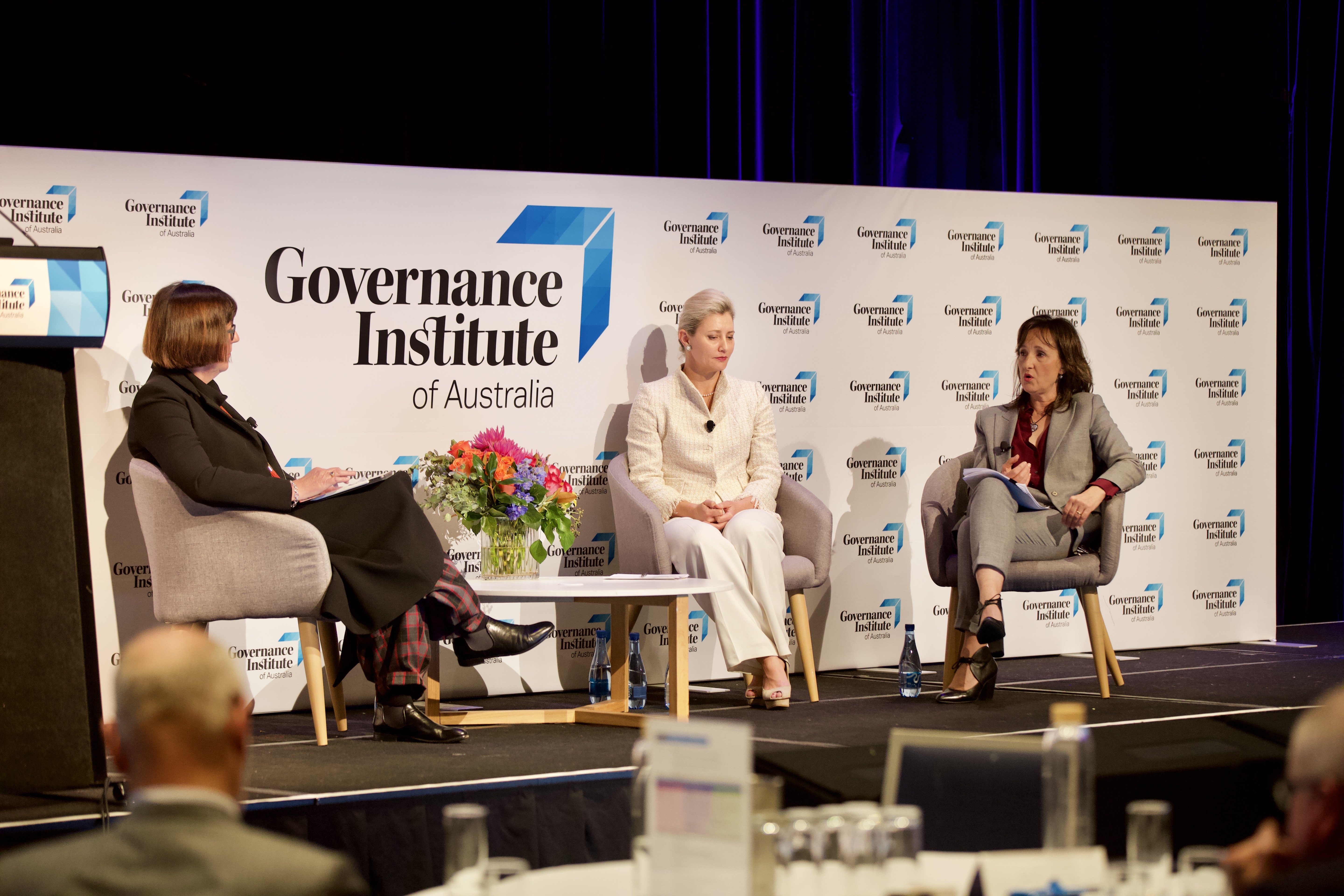 This panel discussed Fiona de Jong’s experience as CEO and director of sport at the Australian Olympic Committee and Irena Reiss’ experience as a director of Special Olympics Australia. Fiona said a lot of people gravitate towards sporting boards because they’re passionate about it, making for a genuinely driven group of people.

In response to a question about how the behaviour of the board is observed, Irena firmly stated that board members need to be accountable to each other and that it’s negative how some boards can have a “group think” mentality and “that’s not why we’re there”. Irena championed the importance of sporting organisations supporting volunteers and fostering a grassroots approach. She also stated that “gone are the days where you can rely on surveys” and that “you must get a grassroots perspective”.

Fiona commented on the precarious situation involving Israel Folau, drawing a comparison to the Nick D’Arcy affair before the 2008 Olympics where he was thrown off the team. She said for the Australian Olympic team this was a “landmark moment that connected off-field behaviour and with on-field”.

The future of the governance professional 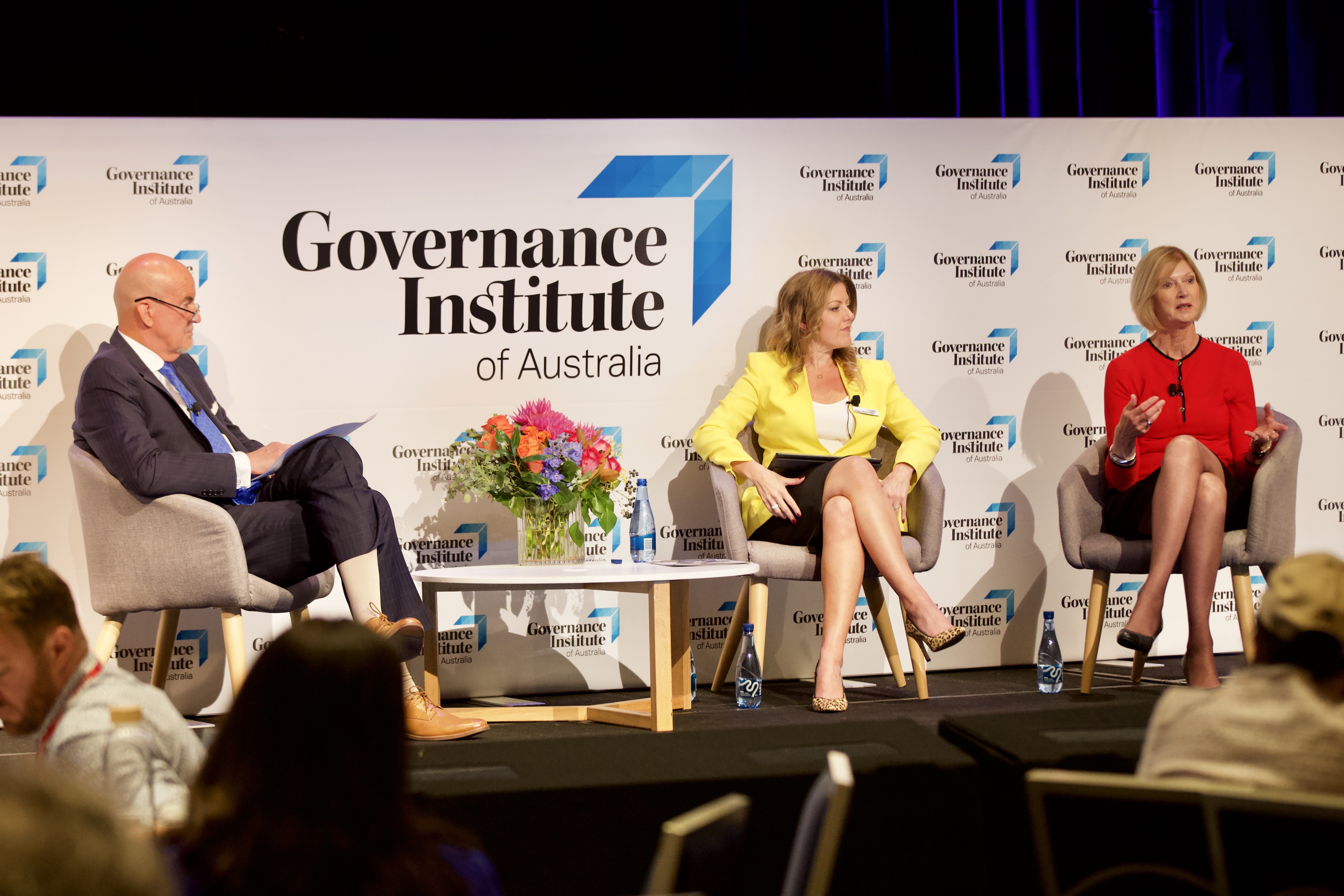 Megan also said the “pace, adherence and style of regulatory change has been oscillating over time” and that “the governance professional must deal with quasi-regulation, not just state regulators”.

Her view on technology in the board room has changed the speed to which decisions are being made. Megan also emphasised the importance of predictive analytics.

Julia McPherson said “the governance professional is the critical link between board and management. You need to think about how you bring value to the role”.

Megan Motto concluded with upbeat remarks and was very pleased with the range of themes and ideas that were covered by speakers over the past two days. Ms Motto said as external and internal change approaches, that it is “incumbent upon all of us to train, upskill and network”. She also stated that community changes are directly impacting on what we all do in the board room. She concluded by saying it’s an exciting time for governance and that the “bar has been lifted”.

Megan announced that National Conference will be returning in 2020 in Melbourne on 3 and 4 September.

If you enjoyed this year’s National Conference you should consider becoming a Governance Institute member. Propel your career and find out more.