GRMF Day 2: Resilience in the face of adversity

Day two of the Governance and Risk Management Forum 2019 kicked off with Academy of Resilience’s CEO Stacey Copas delivering an uplifting and inspirational keynote talk.

Her story started like many kids. She excelled at school and on the sporting field. This was all turned on its head when Copas had an accident in a swimming pool at a young age, leaving her a quadriplegic. After facing immense adversity, Copas said she “felt like the universe had it in for [her] at the time”. 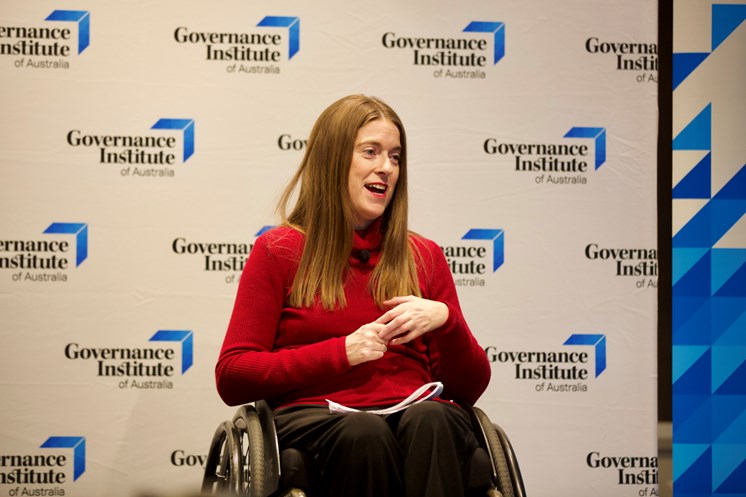 The accident was a transformative point in her life. She quickly learnt about the power of positive thinking, giving it your all and the importance of “taking responsibility for finding a solution”, and not looking to apportion blame on others when something doesn’t go to plan.

Following a trip to the Solomon Islands to help people with disabilities, Copas felt empowered by her experience, motivating her to question what she was doing in her current job, and feeling a strong need to do something different with her life. She took a “leap of faith” and started The Academy of Resilience, an organisation that offers services focused on resilience training, coaching and consulting. 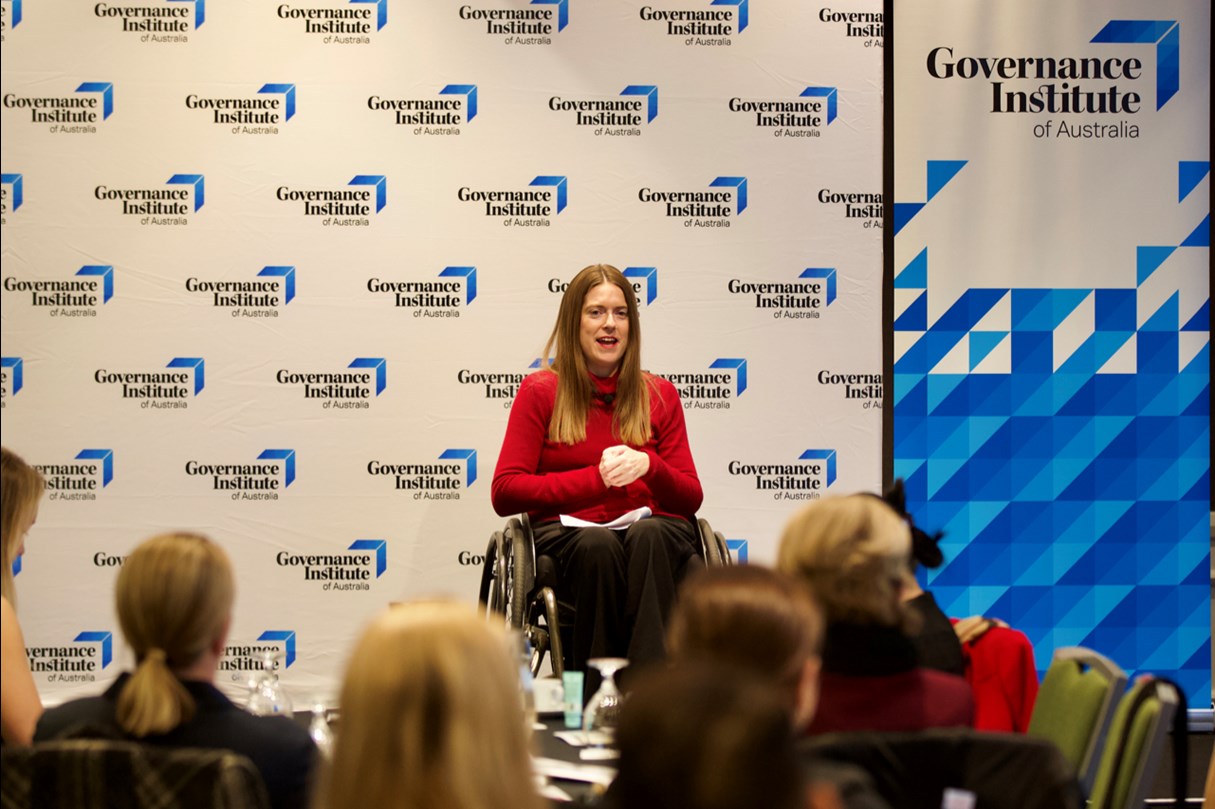 She touched upon her biggest battle, the internal thoughts and conversations that we all have – that “have the power to build up or tear us down… most negative conversations occur in our own minds.”

She left the forum attendees with the idea that you don’t need bountiful resources to achieve in life, you just need to be resourceful. The key takeaway for attendees was to embrace your struggles and make the best out of bad situations.

David Tattam, Director of Research, Protecht, presented on ‘organisational and operational risk — examining best practice for continuity and resilience’. The ideas of thriving, sustainable reward and resilience were key points in Tattam’s session, and “resilience is about achieving a balance between risk and reward”. 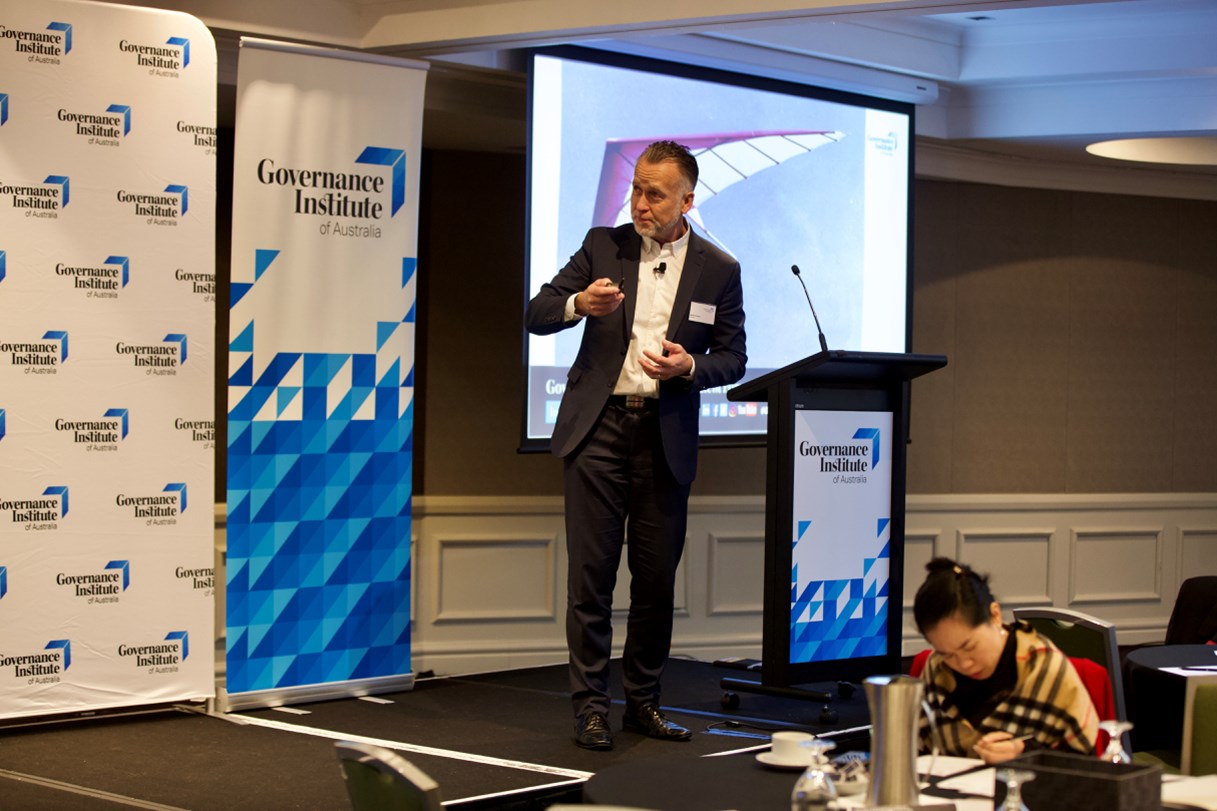 In illustrating his message, Tattam recounted his experience with hand gliding. While he was initially against hand gliding because his ‘appetite for risk’ was not sufficient, his position shifted over time, and he viewed the level of reward (enjoyment!) higher than the risk. He said he always completes extensive safety checks (almost 50 in total!) leading up to his glides — his equivalent of “operational controls”, but eventually hung up the glider. Why? The responsibility of having a family — the risk had returned to outweighing the reward.

Tattam touched upon the major risks for organisations – the “big hits” including cyber, third-party liability, natural disaster, terrorism and fraud. These risks are often not sufficiently addressed by organisations and Tattam directed attendees to the Bank of England’s Building the UK financial sector’s operational resilience report, as a useful guide for their organisations.

Todd Williams, Director, NSW Cyber Security Network, was next up with his session “Making cyber-resilience second nature”. Rather than just discussing risks, he focused on how “cyber security can be an accelerator for business”. 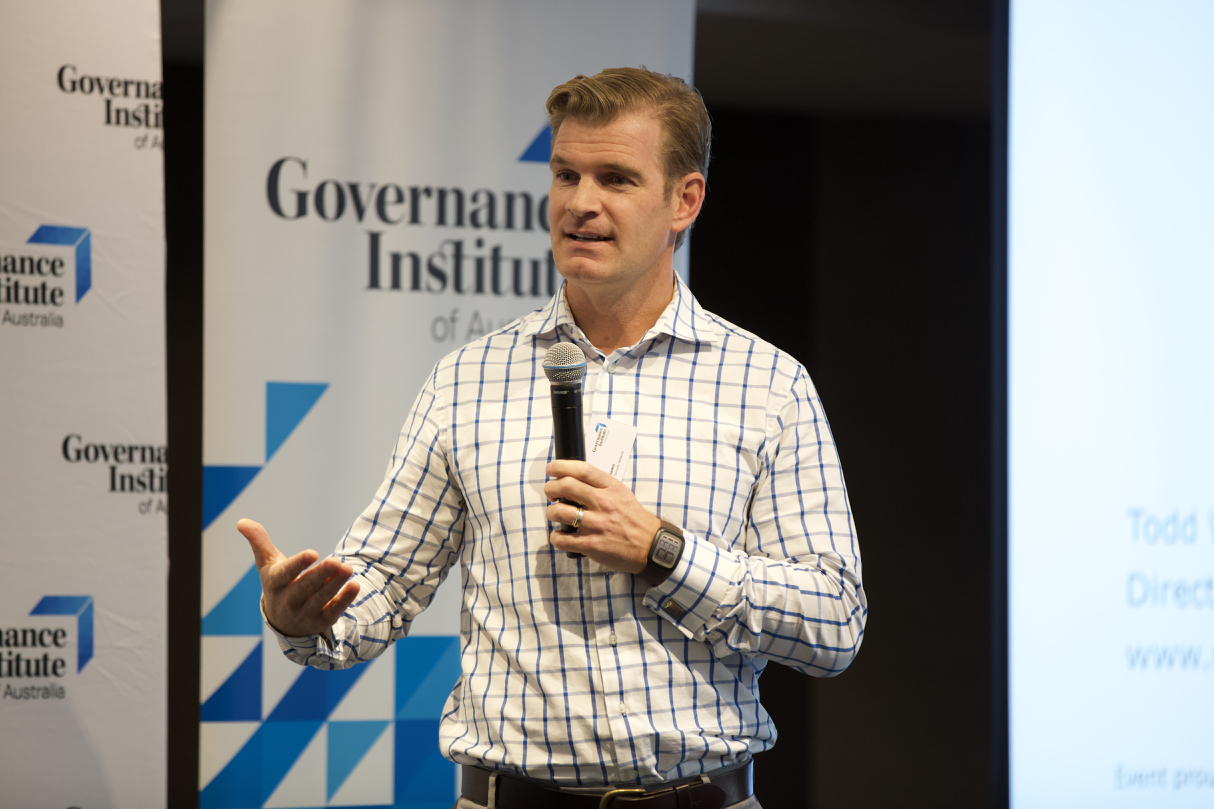 Williams said Cyber security is first and foremost a people problem. Seventy per cent of the issues that happen in any organisation is because people click on a malicious email link, or have inadequate password protection. That’s not just a technology problem, it’s a people training problem.

Far from just being a risk, it is a crucial opportunity. Most organisations don’t see cyber security and data as opportunities. He also challenged the forum to think if their businesses were up to the stage where they were able to provide real-time data to their clients that they understand. Following this, Williams asked attendees if they understood how to use cyber security to ensure this real-time data was safe.

There is no single framework for mitigating cyber security risk – but Williams pointed attendees to Australian Cyber Security Centre’s ‘Essential eight’ - “implementing these can take place at no cost.”

Next up, Megan Motto, CEO, Governance Institute of Australia entered into an ‘Ask Me Anything’ fireplace chat with Kerry McGoldrick, Partner Assurance and Advisory Services, ShineWing Australia. Motto started by thanking all the members she’d met across the other states’ Governance and Risk Management Forums.

By way of introduction, Megan discussed her background as a school teacher, ballerina, and PR professional, who then worked her way up to CEO of Consult Australia, and her governance background, including her directorships. She enthusiastically reflected on her first six months in her role as CEO at Governance Institute and took questions from members in the audience around the organisation’s future strategy. 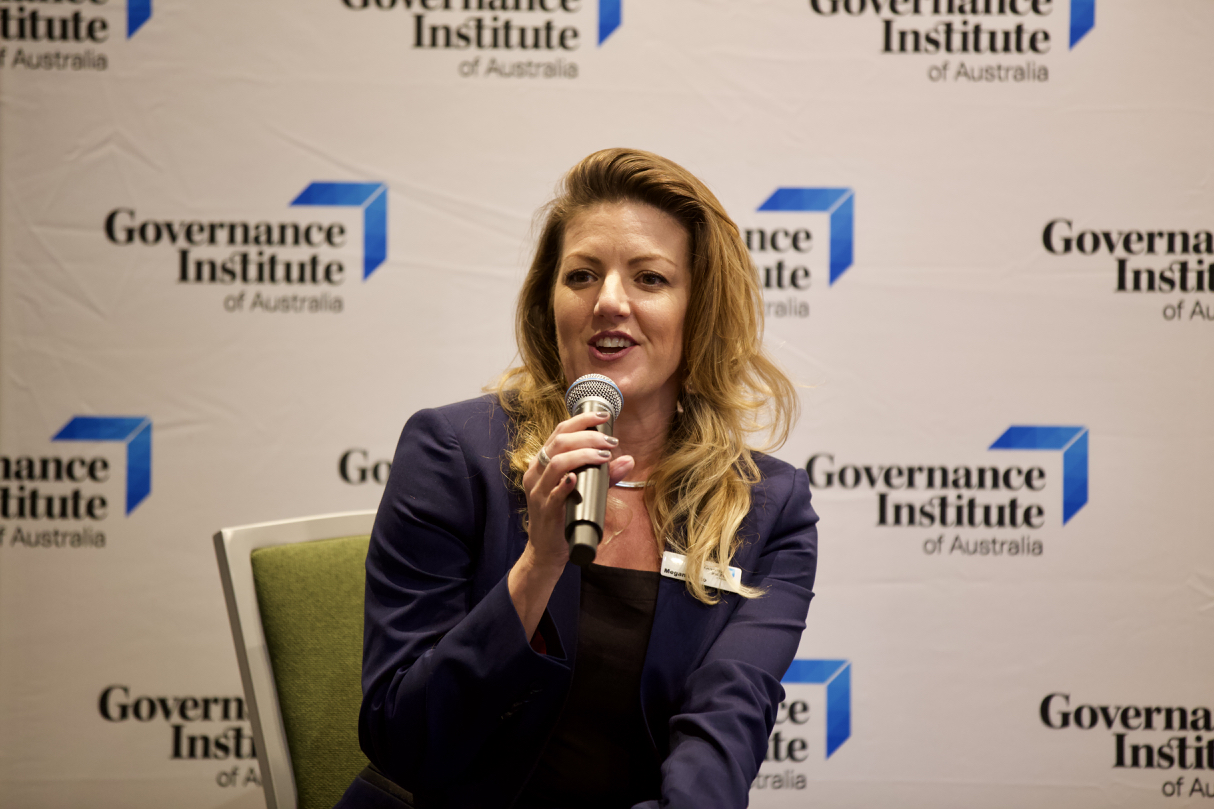 She also said that there’s never been a better time to be involved in the conversation on governance. 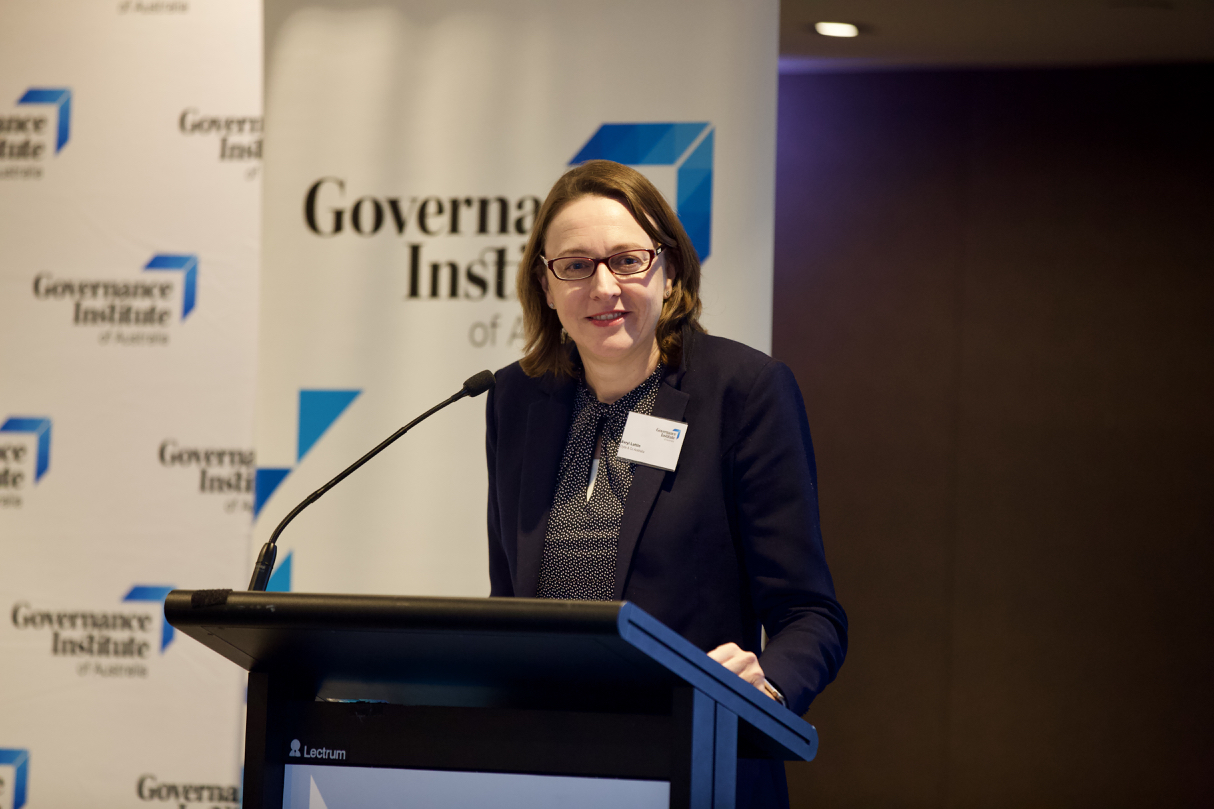 Avryl Lattin, Partner, Clyde & Co delivered an interactive scenario-based workshop. She challenged attendees with thought-provoking questions from the perspective of non-executive directors on a board, dealing with ‘impossible’ scenarios such as an hour-by-hour crisis scenario involving an oil rig. She asked: when should the company notify regulators? How do you respond to news of fatalities? What happens when a whistle-blower goes public? What about a cyber-attack or ransomware? 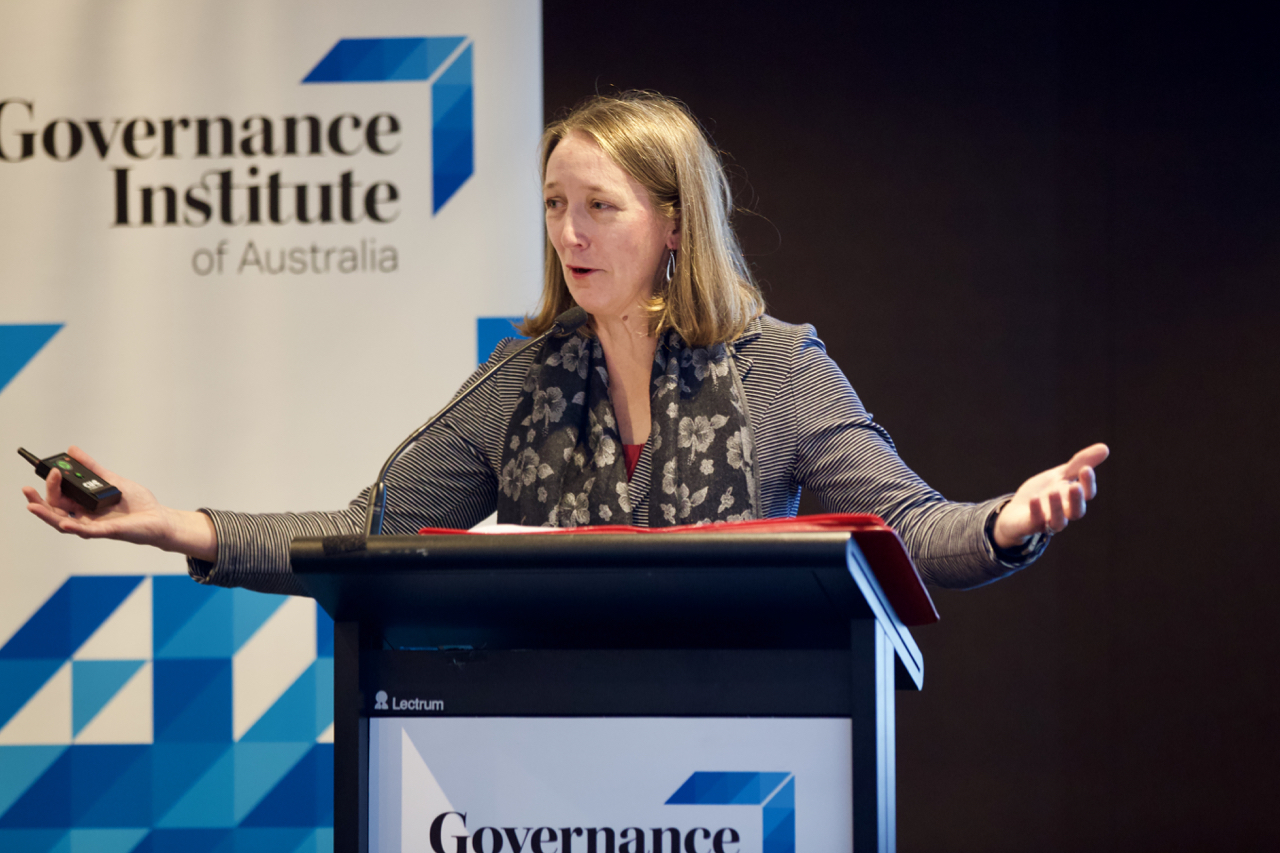 Beck Dawson, Chief Resilience Officer, City of Sydney, spoke to the forum about the Resilient Sydney strategy initiative – a five year strategy, a part of the 100 Resilient Cities initiative. She told attendees that Resilient Sydney: A strategy for city resilience was an initiative that involved a wide range of groups in the community including all levels of government.

Ms Dawson discussed some of things that make Sydney vulnerable, identifying growing inequity and differential opportunity across the city, lack of action adapting to heat and climate, declining social cohesion, community understanding and preparedness for emergencies and disjointed governance and distrust. She went on to talk about some of the NSW state government resilience actions including NSW State Infrastructure Strategy and the Greater Sydney Region Plan.

Ms Dawson ended her presentation emphasising that “resilience is a team sport” and “it takes a city…”.

David Nichols, from Xinja Bank, described some of the pressure situations he has been in across his career, and that resilience is about “staying on the rollercoaster. Sometimes it’s going to go upside down, and sometimes it will come to a sudden halt.”

The panel tackled the challenges of work-life balance with Motto, and flexible working policies, before a discussion around staff accountability and building a culture of trust. Sean Ward raised a key point – to create a culture “you treat your staff like adults”, and sometimes you have to trust them to act in your stead. 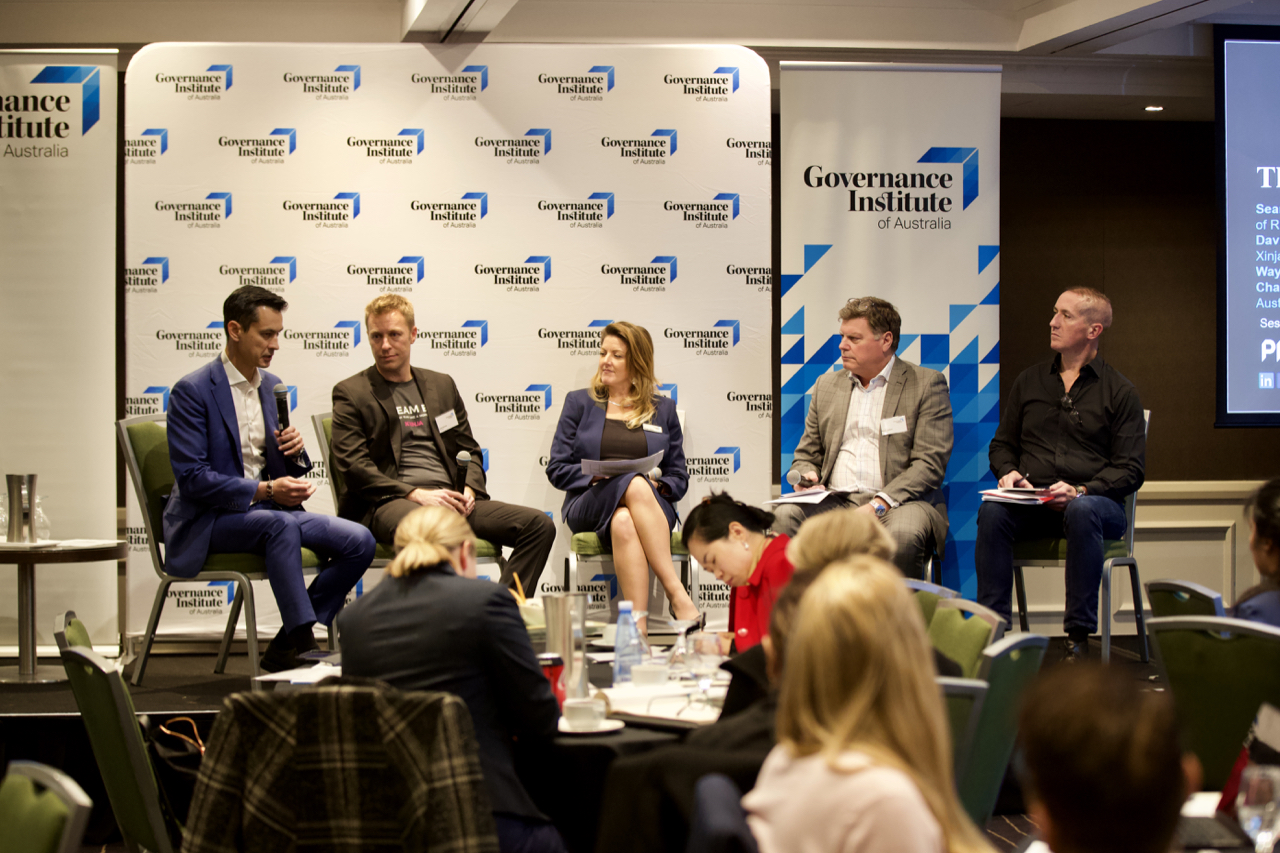 The topic moved onto cyber security, and its impact upon an organisation’s efficiency - and how can staff be encouraged to embrace this. Wayne Gilbert from PKF Integrity emphasised how training is vital. Nichols believes that communication and training are key and that organisations should leverage technology to up-skill their staff.